With its offering of innovative culinary concoctions made of micro herbs, vinegars, fermented produce, as well as a mix of cooking techniques, Luke Whearty’s Operation Dagger in Singapore has been at the forefront of Asia’s bar industry for the past few years, appearing on the World’s and Asia’s 50 Best Bars lists year after year.

Despite its world-wide fame and success, entering through Operation Dagger’s plain black door on Ann Siang Hill and walking down the sketchy concrete stairwell still gives the impression of penetrating into a top secret location. The “bunker-chic” atmosphere features a gorgeous lightbulb installation (what a bitch to clean it must be!) and stark concrete monolithic high-tables. The apothecary-looking unlabeled bottles of booze behind the bar and the greyish decor convey a certain degree of lab-like austerity, contrasted by the warmth of the staff, the polished wooden counter-tops and the leather wall bench seatings, which make it a refined yet unpretentious environment for groups of friends to catch up over loud chatters. 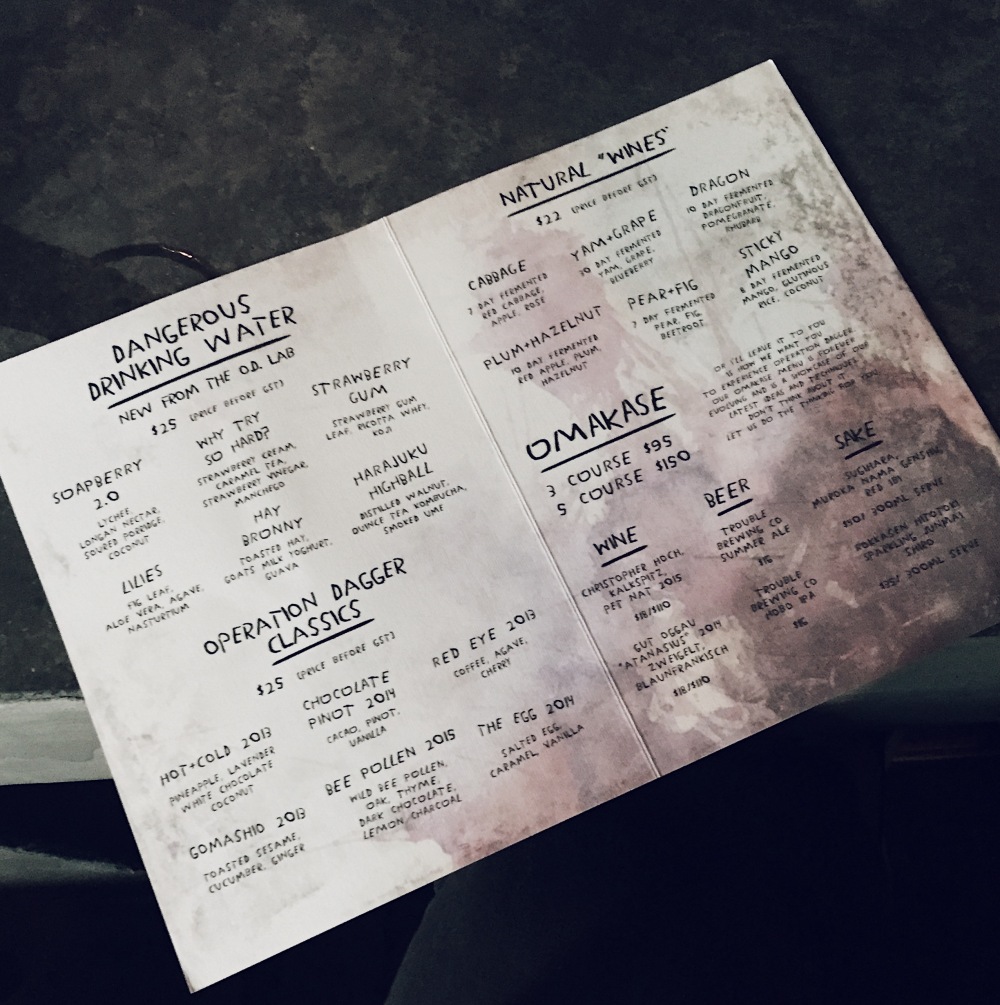 But Operation Dagger focus is all about the drinks, hence a compact but comprehensive menu list divided into four main sections: the Dangerous Drinking Water, new experimentations from their lab; the Operation Dagger Classics, a selection of their most popular drinks; the Natural “Wines”, a well-researched list of fermented vegetable, fruit and nuts concoctions; an Omakase menu  which can be three or five courses where each drink is accompanied by a small kitchen bite. 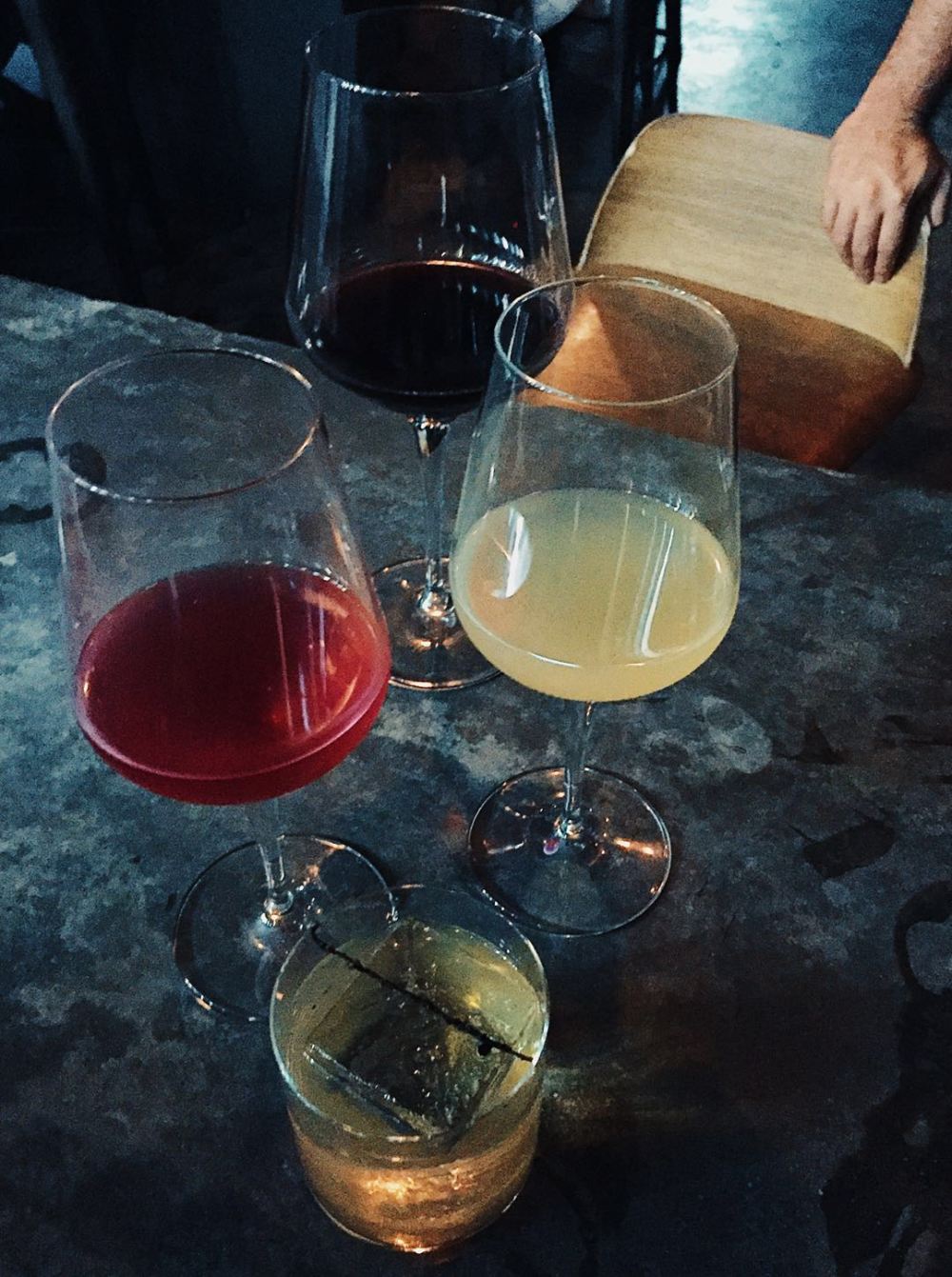 Their Natural “Wines” (all priced at S$22+), are light and pleasant, effortlessly presented ungarnished in elegant wine glasses. The Dragon and the Sticky Mango are made of their respective ten and eight-day fermented fruits plus another few ingredients each. They taste a bit like fruity kombucha, but the fermentation and brewing methods employed allow for a more refined layering of complex flavors.

The Plum + Hazelnut cocktail, also from the Natural “Wines” list, is probably the craziest, most surprising drink I’ve ever had. Science wants the 10-day fermented red apple, plum and hazelnut concoction to taste like… MOZZARELLA! No joke, it really does. The hazelnut cuts through the acidity of the fermented apples, so that the fruitiness remains subdued while a fresh milky flavor prevails on the palate. It’s not a delicious cocktail per se, but it is, to say the least, unique. 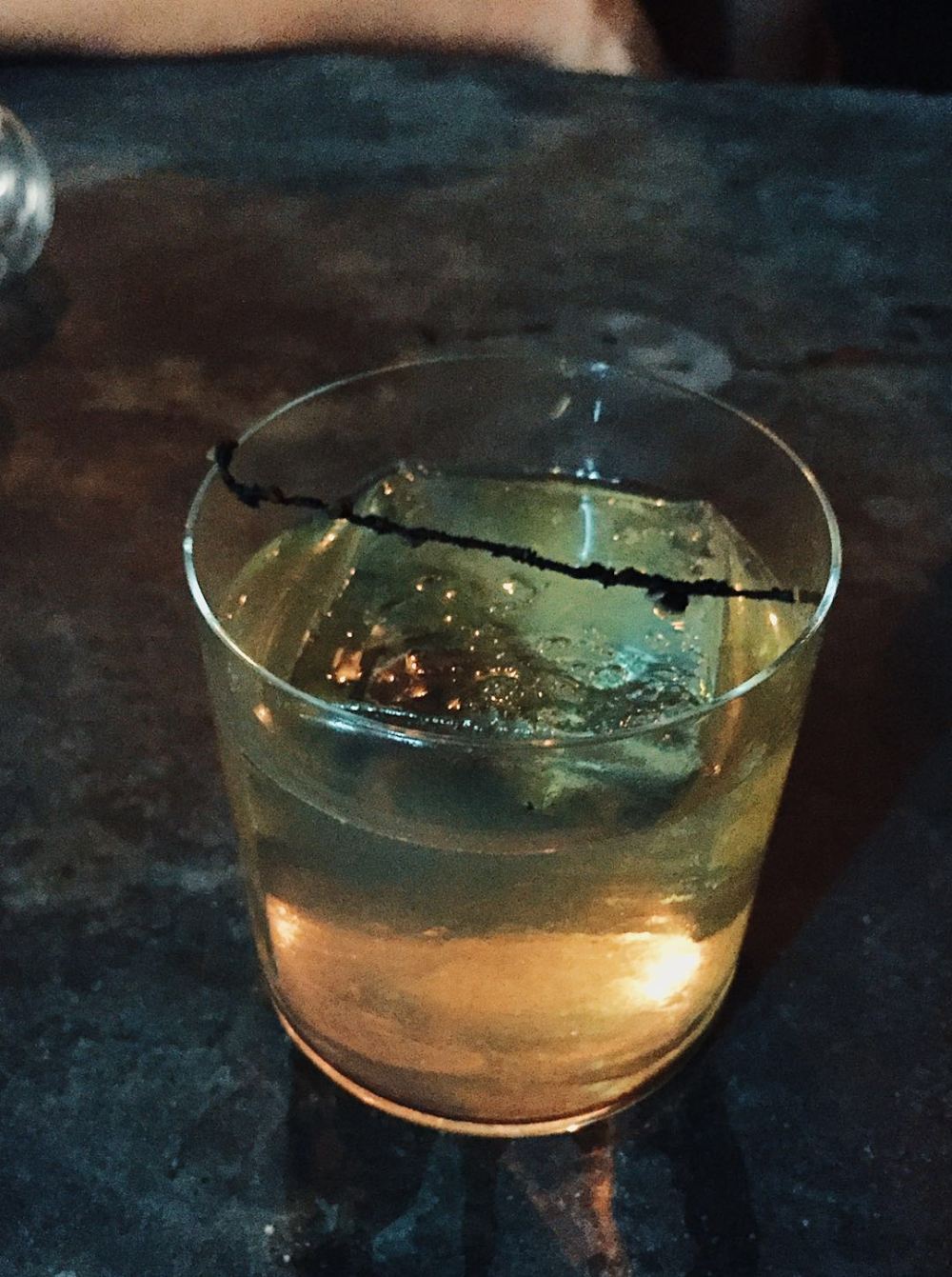 The Bee Pollen (S$25+) from the classics section is quite a confusing drink. During my visit, the staff simply described it as an old fashioned. At first sip though, it tastes lower in ABV and a bit bland, with a short finish that doesn’t linger on the palate. I was so uncertain about this drink that I actually researched it as I got home: turns out it’s an epically complicated version for an old fashioned, prepared sous vide over a number of hours and accompanied by a sophisticated chocolate-covered, lemon charcoal-dusted thyme garnish (find its recipe on The Pouring Tales). 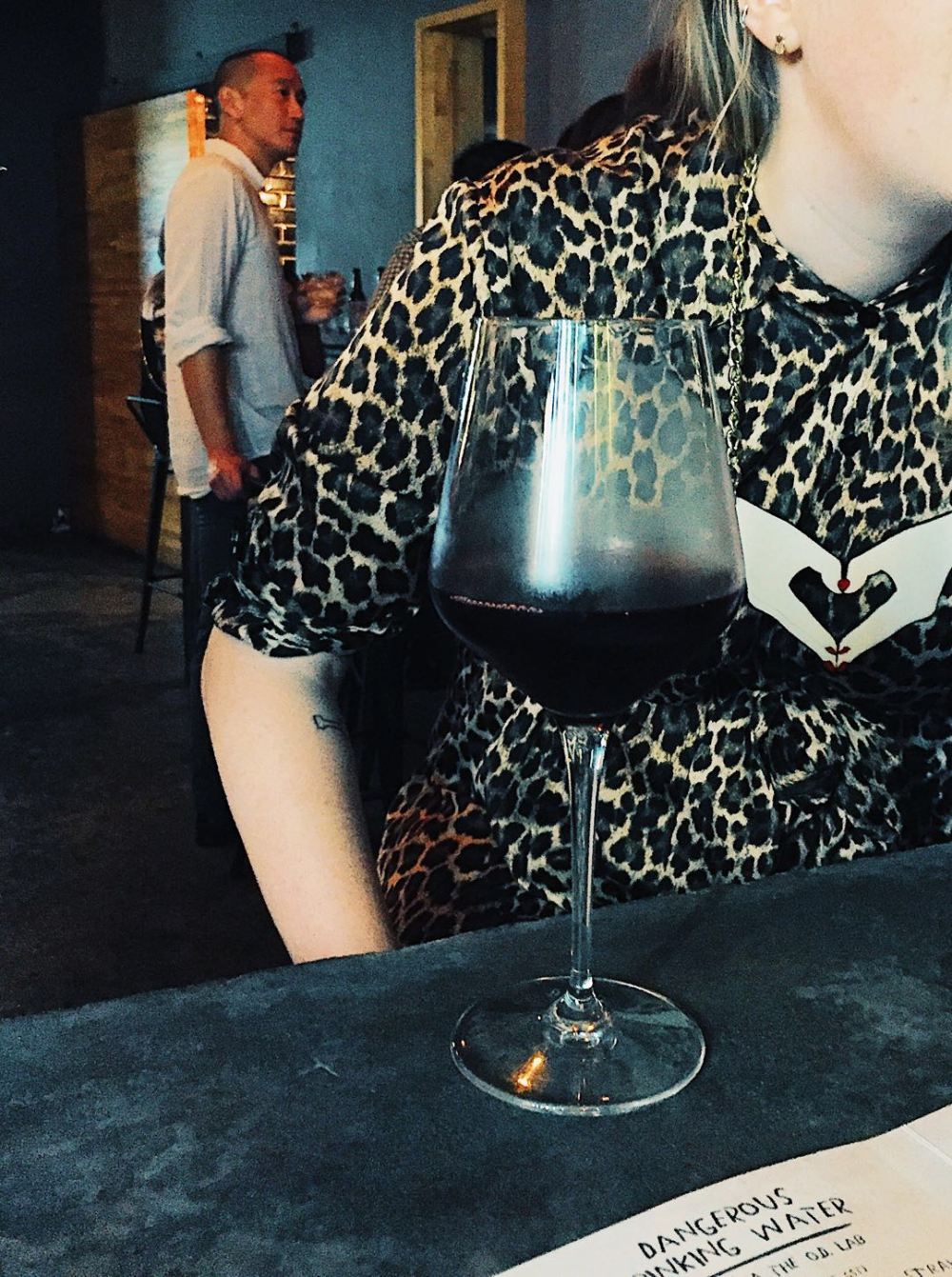 The show stopper and the one reason why I’ll go back to Operations Dagger over and over is the Chocolate Pinot (S$ 25+). Head Bartender Sasha Wijidessa explains that the recipe was originally invented as a way to not waste unfinished bottles of wine, so they’d infuse the leftovers with vanilla and raw cacao before it went sour. Besides the no-waste approach which inspired the invention of this drink, what pleases this wine snob behind the keyboard is that the pinot noir keeps all its traditional characteristics – acidity, tannins and full berry aromas – while being harmoniously complemented and enriched by the chocolate and vanilla flavors. Served chilled, this cocktail is utter perfection poured into a glass.

Overall, I love the ambiance and the uniqueness of Operation Dagger. Nevertheless, while it’s interesting to drink cocktails that are driven by execution and culinary sciences, I personally feel like the experience lacks in storytelling and wish they could step up the way they communicate about their drinks, maybe through a more evocative and transparent menu concept instead of a mere listing of ingredients. By doing so, they would allow for a richer experience where both brains and palates are stimulated to create a generally less stiff and more memorable experience.

This site uses Akismet to reduce spam. Learn how your comment data is processed.